…stunted from birth by a meagre diet of Guinness and stew… 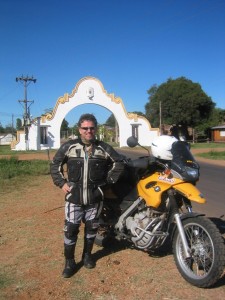 Norman Magowan is from Belfast, Northern Ireland, where he worked in the aerospace industry for 10 years before moving to Stevenage in England in 1989. For the next 15 years he was gainfully employed in the UK Space industry, until he decided to take voluntary redundancy from his role as Quality Manager on a leading space programme to take up the challenge of the Pan American Adventure.

Since returning from the Americas, Norman has written two books, Leprechauns in Latin America and Leprechauns in Alaska, which tell the full story of the Adventures in Yellow and he gives entertaining talks and book signings at clubs and events throughout the country. 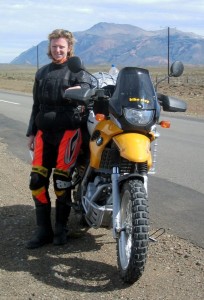 Maggie Magowan is a native of Holywood, County Down, and is currently a qualified Pilates instructor, teaching her own classes in the Herts area. She always wanted to travel and has been fortunate that Norman’s job provided the opportunity to live and work in Munich, Holland, and French Guyana.

Norman and Maggie met when they were 17 and there were two major influences on their early life together.

The first was inspiration from that book… ’Jupiter’s Travels’ by Ted Simon, read by just about everyone who ever travelled anywhere on a bike.

The second major influence came in 1981 when they set off, two-up on a little single cylinder Kawasaki Z200, to undertake a 3,000 mile round trip from Belfast to the South of France. It was their first adventure and it left them well and truly bitten by the travel bug. Since then motorcycles have taken them around most of Europe, across North Africa, and coast to coast across the USA.

It wasn’t a lightly made decision to turn our backs on a decent job with a good standard of living. Both of us have been in full employment since leaving school and have grown accustomed to that regular paycheck at the end of every month. However our peaceful, happy-go-lucky world was turned upside down and then finally shattered through dealing with cancer in both of our immediate families. First, Norman’s Dad died from duodenal cancer that took his life at 66. Then Maggie’s brother, David, became another victim of lung cancer and he died quickly, too soon at the age of 48.

Our world was permanently scarred and changed. These events challenged our own existence and made us question what we really wanted from the rest of our lives. One of the things that kept us going through the bad times was the belief that good times would surely follow and so we began to re-examine our dreams. Foremost of these was a desire to undertake a major extended journey, preferably by bike. We had pondered such a trip for a number of years but had always found excuses in work, building a home or lack of funds to put it off. But now those dreams gained a new priority.

Overland to Oz or a run up the Americas looked good. The then current situation in the Middle East put paid to the first, but the second looked very feasible. The next problem was one of our old excuses for not doing it – how to pay for it. The ‘rainy day’ had been and gone and the ‘save something’ would just about cover the cost of the bikes we would need. Then Norman’s work announced that they were seeking volunteers for a severance scheme and the reward for 15 years of faithful service was enough to fund the trip. At this point it became an easy and obvious choice to make.

But realising this dream journey was only part of it. We also wanted to fight back at the cancer, this disease that has taken such a toll on our lives. We decided to dedicate our Pan-American Adventure as a fundraiser for Cancer Research UK. We believe that if we can help in any small way to relieve someone else’s suffering then it has got to be worth doing.