Told in two books, Leprechauns in Latin America and Leprechauns in Alaska, Adventures in Yellow is a heart-warming, humorous, and poignant account of an epic 15 month, 35,500-mile, journey through the Americas along the Pan American Highway.

The lure of the open road is embedded deep within our modern psyche; many dream of setting off with the sun on their back to chase the distant horizon, few dare to venture. 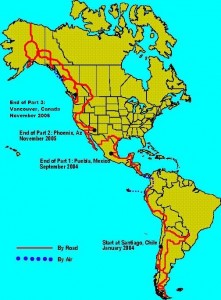 Norman & Maggie Magowan, stunted from birth by a meagre diet of Guinness and stew, dared to chase that horizon when they strapped on a pair of unfeasibly large BMW motorcycles and set off to ride from Chile to Alaska. Told in two books, their story, as they say in their Northern Irish homeland, is “a cracker”!

In January 2004 the pair flew out to Santiago, Chile, where their adventure started with a ride south to Tierra del Fuego, the southernmost tip of the South American continent. From there they followed the Andes through Argentina, Chile, Bolivia, Peru and Ecuador. Highlights included:

From Ecuador, Norman and Maggie flew across the Darien Gap – a notorious stretch of impassable jungle running from northern Colombia into Panama – to reach the start of the Central American leg of the trip, which included:

Sadly, they then had to suspend the trip in September 2004 after receiving news that Norman’s mother was critically ill. The bikes were left in Puebla, Mexico, for 12 months while more pressing family matters at home took precedence.

From September to December 2005 they resumed the journey, touring northern Mexico and Texas, before leaving the bikes in Phoenix, Arizona. Those few months included:

The final North American stage of the journey, the ride up through the States & Canada to Alaska and the end, was accomplished between June and October 2006 and featured: