By Norman Magowan on April 10, 2012 in Adventures in Yellow 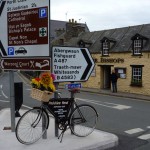 I sit here tapping this blog on a quiet Easter Sunday morning in the kitchen of the very homely Esgair Cottage somewhere in the middle of nowhere but roughly near St Clears in South Wales. Outside the kitchen window, the view: a leaden sky hanging over tree shrouded rolling valleys and each day since we arrived the trees look just a little greener as spring arrives. A peanut laden bird feeder has been our entertainment for the past few days, a draw for all manner of garden birds including a twitchy little nuthatch, more common sparrows, great/blue and coal tits, chaffinches, greenfinches, bullfinches, and the star of the show a pair of beautiful red spotted woodpeckers. Never seen one of these chaps on a bird-feeder before.

The ride across was spectacular to say the least. It’s our first big run of the year on the yellow perils in spite of the mixed weather forecast for the weekend. We left home on Good Friday morning, delaying our departure until around 9am to let the bright sun burn off a nasty overnight frost. Our route for today was pure back-roads, deliberately avoiding any suggestion of motorway. We left Stevenage on some twisties over to Barton, then on to Ampthill followed by a clatter of country lanes that dropped us into the deer-park of Woburn Abbey where majestic herds of deer flanked the road, their hides glowing gold in the early morning sun; could there be a better way to start your first run of the year? Having circumvented Milton Keynes and Buckingham we spilled into the glorious Cotswolds, chasing lanes through golden villages in this often overlooked treasure of England, garden walls ablaze with rashes of purple aubrietia.

A mid-morning brunch in the quaint little tea-room at ‘Foodies’ deli in the beautiful little village of Deddington and then on to the Forest of Dean on snaking roads that thread over the Severn and into the mountains of South Wales. Beyond Carmarthen the GPS directs me up a country track where we have fun fording a fast flowing river to gain our new home for the weekend and this spectacular solitude that, even in the now cloudy weather, is nothing short of inspiring.

Easter Saturday in Waterstones, Carmarthen. Young Darren was mad-keen to have us when Maggie mentioned over the phone that we could put a bike in the store for a book signing. This has been the latest of our 2012 signings, having so far sampled the delights of places as diverse as Watford and Bath, Nottingham and Kettering. The format is usually the same; we turn up at the bookstore, preferably with the bike, and set to chatting with customers, telling them our story and offering the opportunity to buy a signed copy of the books.

When I was first asked to sign a copy of one of my books, I found myself at a bit of a dilemma as I hadn’t really thought out what one should write as a fitting inscription. OK you can jot down the persons name but what then? I realised I had to include some brief statement, something that captured the spirit of ‘Adventures in Yellow’ without being too wordy. My favourite inscription, the one I use most often, is therefore simply “Be Inspired!” I settled on this as it really is what the books are all about and what I want most for readers to take away from them. So there you have it… “Be Inspired!”

Yet this has proven to be a two way statement in that, far from our wander story being the source of inspiration, we have found ourselves in return constantly inspired by some of the people we meet at the signings. What is amazing too is that these contacts cover all ranges of age and sex from the 74-year old lady in Watford who had just returned from a trip to Africa and was planning her next foray to India to the crowd of kids yesterday in Carmarthen; four of them who mobbed us and the bike in the shop, suddenly demanding to know if we were famous. Despite our protests to the contrary, my name on the cover of the book said it all for them. One of them had a smart-phone and before we could say any more he had unearthed a series of photographs of me from our website. This notched up the whole game and we were inundated by a quadraphonic barrage of queries as young minds grasped the magnitude of our journey and the events that had led us to this Saturday on Carmarthen. Whilst they may have left us inspired by our story, I think we were even more inspired. Kids these days get a lot of bad press but if the country is full of kids like these then, trust me, there is hope for us all.

Kettering yielded another duo of these magnificent encounters. First we had a trio of young photography students who were drawn to our new banner which features a collage of some of the most stunning pictures from our journey. It was based on a poster I remembered from years ago showing a picture postcard collection of Georgian doorways in Dublin. For these students our photographs made an instant connection between that wonderful world out there and the fact that taking it all in from the saddle is one of the best experiences in life. Alex was already into his motocross and planning a raid into Morocco… If the country is full of youths like these then, trust me, there is hope for us all.

Most inspiring of all was the second of those Kettering encounters, Johnny Morrison, a septuagenarian from the Isle of Man. A heavy set man with a healthy ruddy complexion that took maybe 15 years off his true age, he wandered into the store on the look for something different when we stopped to chat about our Latin American book. At the mere mention of South America his eyes lit up and he regaled us with tales of mountaineering, of how he climbed Cotopaxi in Peru, Kilimanjaro in Africa and numerous other peaks all over the world.

Three weeks ago, Johnny suffered a massive heart-attack. In the back of the ambulance, on the way to hospital, the young medic told him not to worry, that he’d be all right. He knew from the look on her face that this might not be the case and she was deeply concerned. So he smiled and said to the lass “Listen girl. It’s all right. I’ve had a fantastic life and if my time is up now so be it. I have lived to travel all over this planet and see some of its most wondrous sights. I have no regrets, so if this is it then they’ll be burying me with a great big smile on my face.”

Meeting Johnny Morrison was one of the highlights of our entire Adventure in Yellow. This time, we were the ones who had truly been inspired!

← “These Rough Notes…” A Band of Heroes Remembered!
Bradford! →