By Norman Magowan on October 14, 2011 in Adventures in Yellow 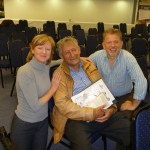 On 6th October 1973 Ted Simon left England on his Triumph Tiger motorcycle to commence his epic round-the-world journey that would be immortalised in the book “Jupiter’s Travels”. I know Ted wasn’t the first to strap on a bike and see how far he could go but “Jupiter’s Travels” has become the foundation for just about every trip since.

I first read the book when I was in my late teens. Back then I had never read any travel books, my usual literary diet being war stories and westerns, but I remember a trip into town on a rainy Saturday afternoon and a mooch round Easons, our local Belfast bookstore. I was scanning the vast array of paperbacks on the shelves when my eye caught the glint of something unusual; a garish purple-covered title with this moustachioed guy straddling the motorcycle on its sidestand on an apple-crumbled desert road. The guy looked like a gunslinger in a spaghetti western minus the poncho. The title itself held further intrigue; “Jupiter’s Travels”, what was all that about? I purchased a copy on impulse to find out…

At around the same time, my girl Maggie and I had just pooled our ‘life’ savings to buy a little Kawasaki Z200. We eagerly digested this new volume and our young minds were inflamed with possibilities like no book has ever done before or since. Our next trip to Easons was to the map section where we purchased a map of Europe and spent the next few weeks pouring over it to see how far we could go. A couple of ferry tickets and we left our island home to begin a journey of discovery and began learning that there are many more jewels than emeralds in this world.

38 years later, on the anniversary of Ted’s departure, we have joined a hardcore element of motorcycle travellers in the Coventry Transport Museum for the launch of the ‘Ted Simon Foundation’ and to recognise the impact that “Jupiter’s Travels” has had on our collective lives. Mingling with the crowd I hear a few nervous Hobbits questioning why we are all here as it hasn’t been made too clear around the Shire what this is all about…

There is a generation gathered in Coventry tonight, a generation where teenage spots and endless enthusiasm have been replaced by grey beards and hard-drawn experience. The ‘Ted Simon Foundation’ aims to utilise this maturing process and direct it to encourage and promote future travellers, not by funding new trips but by providing assistance to voyagers seeking to record and publish their experiences. These experiences are all unique (there is no boilerplate for this sort of stuff) and it is important to try and capture them.

In our own case, we well understand the complexities of trying to get ‘Adventures in Yellow’ published. We returned from Alaska in 2006 yet it took five frustrating years to release our title, five years as unknown prospects treading the torturous maze that is the publishing mine-field. Persistence and a touch of good fortune led us to success but we both realise how close it was at times to never happening and shudder to think that our journey could have easily faded to just a memory and our experience diminished.

Publishing was important to us too, not just to record the story, but to carry on the torch lit by “Jupiter’s Travels” and inspire others to do the same. The Foundation has access to a veteran hardcore of experienced and successful travel writers and film producers and therefore aims to unite future prospects with grizzled mentors to guide them through these twisting paths and successfully capture their stories.

Successful prospects will be known as “Jupiter’s Travellers” and we were introduced to the first batch tonight. A few of the dozen were known to us already. Bernard Smith and Cathy Birchall at http://worldtour.org.uk/ recently completed a round the world trip on their 18-year-old BMW R100RT. What is incredible is that Cathy is blind so what must the world seem like to someone with this impairment? Henry Nottage has ridden a Cagiva Elephant to the ‘Stans and back and is currently planning to ride a Domino’s Pizza delivery bike across the Sahara for charity (see www.bamokoorbust.com). With the other “Jupiter’s Travellers” they all have great tales to tell and now the Foundation is here to help.

The inauguration event in Coventry was a great evening out, although I guess any event meeting your hero and inspiration is bound to be. Ted is in his eighties now and still doing what he’s always done best: inspiring us all, this time with the hope that we can be as active and sprightly when we reach that age. I hope that the “Jupiter’s Travellers” will benefit for years to come from this ‘Ted Simon Foundation’, but let us never forget for one minute that Ted is the Foundation.

← Northampton…and friends you have yet to meet!
Selling to the Princesses →